Regarding the charger connector.

So the FTR has a battery charger connector hanging out the left and side of the bike, it's a male/female clip on.
My first question is which is the positive and which is the negative? This leads on to another question if I connected a battery charger to the wrong terminals would it blow a fuse on the bike?
I have a C-Tek charger and bodgied up a connection to the original coupling, the connector I bought had the usual red and black wires I think that they are red to negative and black to positive. I also think this has led to me making a wrong connection then I've had to replace a fuse shortly after.
I plan to wire in a C-Tek charger connection but that needs a bit of fettling to make it happen.

RED IS POSITIVE NOT NEGATIVE. Yes it can blow a fuse but normally the tender/charger if it is any good is protected against reverse polarity and will indicate you have it cross connected without blowing any fuses.

The connector is an SAE one and on the bike for safety the socket is the positive and exposed pin the negative or ground.

Below is an SAE to SAE extension lead. This is what connects to the bike. You can clearly see the exposed pin has the red wire going to it. This is the POSITIVE that connects and fits inside the bikes POSITIVE socket. 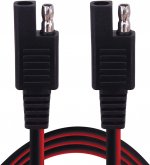 The connector is an SAE one and on the bike for safety the socket is the positive and exposed pin the negative or ground.
Thank you that is the answer I needed...

The I cut the wires on the double ended connector I bought and maybe I cut at the wrong end to get that connector bodgied up to the C-Tek alligator clips. For now I'm charging direct of the battery

I bought the SAE to SAE extension lead similar to the one depicted, heatshrunk it and connected it, cable tied it up the frame and it tucks neatly under the left hand side of the saddle when not in use. It is easily accessible and also with the use of an SAE to double USB adaptor can keep my SENA and my phone fully charged on longer journeys. It is there I also connect my tender when the bike is not in use.
F

As far as i remember correct.. (did it last year)
The orig. SAE plug extension was connected to the battery directly.
Just took it off and put the C-Tek extension on and the plug hanging nearby the regulator now
(easier access if the charger is always on the ground).
Last edited: Nov 14, 2020 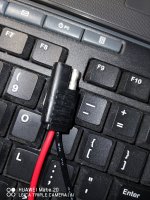 The picture I posted is the equipment extension variety which obviously has the pin and socket polarity reversed which you should have bought for your 'adaptation.'
Last edited: Nov 13, 2020

Please see my post and photos under FTR 1200, turning into a love hate thing...

Good discussion here folks - so just to confirm as there as been some back and forth.
Per @ferraiolo1's post:

ferraiolo1 said:
The oem connector on the ftr that’s located behind the plastic left panel is fused power and not connected directly to the batter.
Click to expand...

The factory installed SAE connector is part of the main harness, is fused, and is bi-directional to either charge battery or supply 12V power.
Correct?

Staff member
That is correct. It’s fused, so if you’re tying to pull too much power, like heated gear, it might pop the fuse.